Frederick Meredith was born on the 5th of October 1763. It is thought that he was born in Dinham, Ludlow, Shropshire, England. It is unclear where exactly Frederick was born, with people speculating that he may have been born in Denham, Buckinghamshire, London, England which is just South East of Harefield, home to many bakers, which Frederick later became (see Frederick Meredith by David Swinfield).

Many of his descendants are currently using DNA research to try and narrow down an area of the UK he and his ancestors are from. If you are one of Frederick's descendants and would like to know more you can get in touch with Paul Gallagher at the Frederick Meredith Descendants Group (FMDG).

Not much is known of Frederick's early life in England.

On the 13th of May 1787 Frederick left from Portsmouth, England on board the “Scarborough” as part of the First Fleet. There were 208 male convicts onboard. Frederick came free as steward to Captain John Marshall.
The First Fleet consisted of 11 ships which sailed from Great Britain on the 13th of May 1787 with about 1,487 people, including 778 convicts (192 women & 586 men), to establish the first European colony in Australia. The fleet was led by Captain Arthur Phillip.

So on the 21st of January 1788, aged 24 years, Frederick arrived in Botany Bay, Sydney, with 201 male convicts, 30 crew and 50 marines surviving the 251 day voyage aboard the "Scarborough". They sailed into Port Jackson (Sydney Harbour) on the 26th of January. The new site had everything the first settlers needed; deep water close to the shore, shelter and fresh water. Phillip named the site Sydney Cove, after Lord Sydney the British Home Secretary. Today this date is still celebrated as Australia Day, marking the beginnings of European settlement.

This was one of the world's greatest sea voyages — eleven vessels carrying about 1,487 people and stores had travelled for 252 days for more than 15,000 miles (24,000 km) without losing a ship. Forty-eight people had died on the journey, a death rate of just over three per cent. Given the rigours of the voyage, the navigational problems, the poor condition and sea-faring inexperience of the convicts, the primitive medical knowledge, the lack of precautions against scurvy, the crammed and foul conditions of the ships, poor planning and inadequate equipment, this was a remarkable achievement.

On the 22nd of February 1788 Frederick was charged with exchanging goods with convict James Stow. Frederick had given the convict beef and bread as well as rum in exchange for a 'curious beast' a possum. Such exchanges were against government orders, and although Meredith had his master's
permission, he was sentenced to receive 100 lashes, on his bare back, with a cat of nine tails, in the middle of the convict’s camp. Governor Phillip reduced the sentence to 50 lashes in response, said surgeon Arthur Bowes Smyth, to appeals from 'several gentlemen' who respected Meredith and who believed the punishment too harsh for the crime. He was the fourth person to appear before the magistrate and received 50 lashes as punishment.
Frederick was on the “HMS Sirius” when it sailed from Sydney in October 1788 for the Cape of Good Hope, South Africa in search of food for the starving colony. They returned to Sydney in May 1789.

On the 9th of May 1790 a daughter was born to Mary Allen. She was named Charlotte.

In Sydney he was given the care of 25 sheep and lambs, the property of commissary John Palmer. In August, Frederick and Mary gave evidence before the Court of Criminal Jurisdiction in the trial of Hugh Low, charged with stealing one of the lambs. Low was sentenced to death and executed the next day. Judge-Advocate David Collins noted that no leniency could be extended because 'the preservation of our stock was an object of so much consequence to the colony'.

After being back in Sydney for 1 month he then departed aboard the Dutch merchant ship "Waakzaamheid" (alternate spelling "Waaksamheyd") bound for England, with 125 men on board. He was hired to sail to Batavia to collect supplies and then on to England for Captain John Hunter to face court-martial, for the loss of HMS Sirius, in which he was eventually honourably acquitted.

On the 22nd of April 1792, Frederick arrived in Portsmouth, England aboard the "Waakzaamheid". Owing to her bad sailing, contrary winds, and calms, the voyage to Batavia had lasted for 26 weeks (onboard they only had provisions for 16 weeks). While attempting to get provisions at Mindanao, the party had a serious affray with the Malays, fortunately without sustaining any loss.

Unknown to him, back in Sydney his daughter Charlotte had died in May 1792 and the child’s mother Mary Allen was living with another convict, Edward Pales.

Frederick departed Gravesend in Kent, England on the 8th of August 1792 aboard the “Bellona”. After a 163 day voyage the “Bellona” arrived in Sydney Harbour on the 16th of January 1793.

The ship was carrying 17 female convicts, including Ann Case whom he had impregnated during the voyage and Sarah Mason who was to become his future wife and mother to 6 of his children. His daughter, Amelia Meredith, born to Ann Case, was born on the 10th of May 1793. The affair with Ann was brief and by the time Amelia died, on the 27th of February 1794, Frederick had formed a liaison with Mary Kirk, who was transported on the “Royal Admiral” in 1792.
On the 26th of April 1794, Frederick fathered another child, this time to Mary Kirk. The daughter was named Charlotte. Charlotte and a man named William Stewart had 3 children; Jane Rebecca, Robert, and John, born in 1812, 1816, and 1818. Charlotte then married James Charles Farrell in 1825. Their children were James Lawrence (1825), Mary Elizabeth (1828), Charlotte Rosina (1831), Charles Frederick (1833), and William Thomas (1835). She died in 1852 in Port Macquarie, New South Wales, aged 58.

On the 11th of November 1794 Frederick received his 2nd land grant, 60 acres at Concord which he named “Charlotte Field”. He later sold this property in 1798 to John Colethread/Coulthread for 87 pounds, as it too was unsuitable for farming.

In September 1800 he was subscribed to the rules and orders of the Sydney Loyal Association (an armed body which was formed to guard against the possibility of an insurrection by seditious Irish convicts). Governor Hunter set up the Sydney Loyal Association in 1800, following reports of rebellion by Irish convicts. Frederick volunteered as an armed policeman & was involved in the Vinegar Hill uprising.
In March 1809 Frederick had resumed his trade as a baker. He had a bakehouse in Chapel Row (now Castlereagh St, Sydney).
In 1811 Governor Lachlan Macquarie formed a regular police force and Frederick was among those appointed as constable. He eventually became the first Chief Constable at Liverpool NSW Australia.

He married Sarah Mason on the 26th of February 1811 at the St Phillip’s Church of England in Sydney. 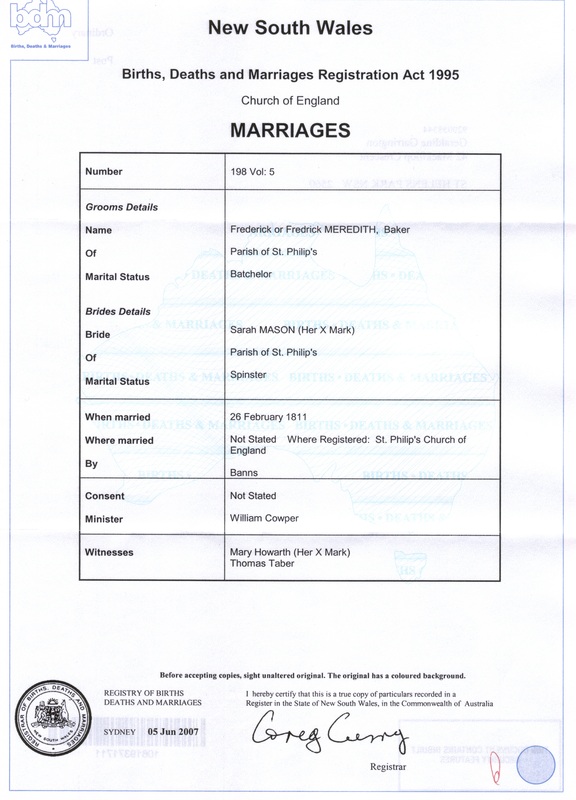 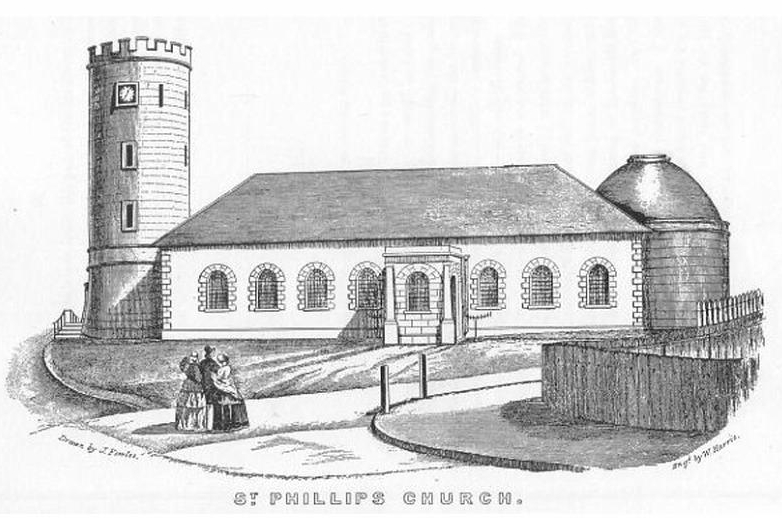 St Phillip's Church 1798-1856, was on part of the site now covered by Lang Park, which is bounded by York, Grosvenor and Lang Streets, Sydney NSW Australia. The church had a 150-foot high, round clock tower. It was made from poor materials and gained a reputation as "the ugliest church in Christendom". The church was named in honour of the colony's first Governor, Arthur Phillip.
On the 23rd of May 1822, he was appointed constable at Liverpool. On the 11th of March 1823, Frederick was nominated to act as Chief Constable at Liverpool.

In 1828, when the first post office was opened at Liverpool, Frederick acted as the first postmaster until Donald MacLeod took up his appointed position.

Frederick remained Chief Constable at Liverpool up until at least 1833.
Frederick died on the 23rd of June 1836 at his residence “Gunsborough” Liverpool Rd, Bankstown aged 72 years. 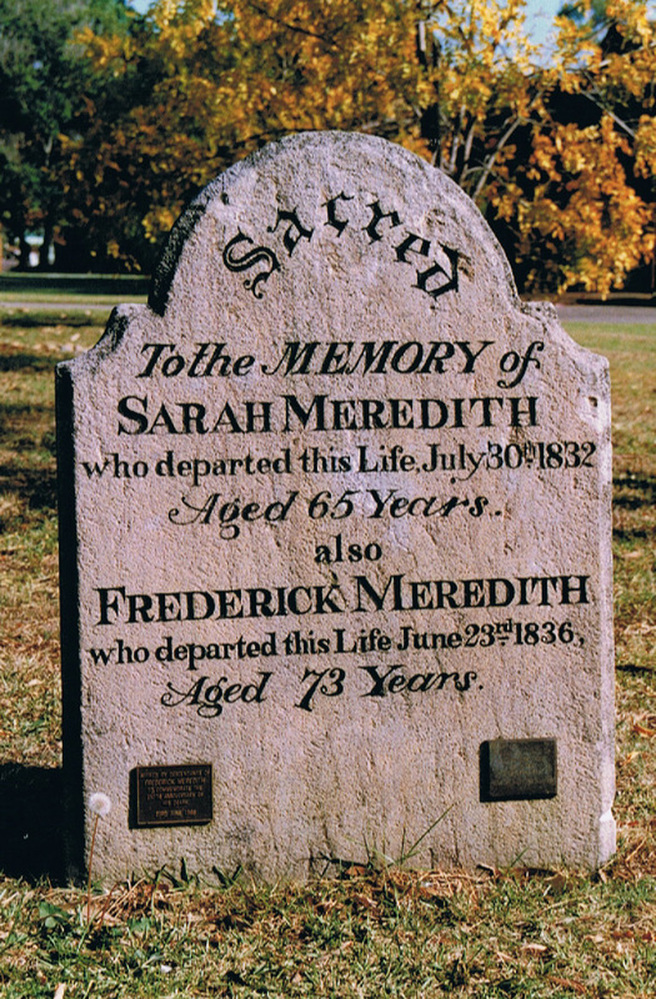